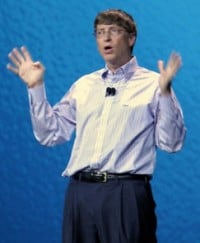 Bill Gates said the words. I was there. I heard it. I posted it on YouTube. Now the whole world knows.

“From tonight, at midnight, we are making the Microsoft server source-code open and available to everyone.”

At the D7 conference, sponsored by Microsoft and News Corp, there was pandemonium. The balance of Gates’ presentation was lost and it was only afterwards, in a private interview, that the rest of the story came out.

“We have patented specific components of the code and these are indicated. If you use any part of these components then you will have to pay us license fees depending on the number of copies you make,” said Gates.

In January 2008 Red Hat signed a joint licensing agreement with Microsoft and agreed to pay for some of the 235 patents that Microsoft had accused the open source movement of violating back in 2007.

“With our patents now protected we are happy to release our code to the open source community and allow everyone to integrate their software with ours. As long as they pay for it,” said Gates.

At D7 the pandemonium continues.

Background
When the first commercial mainframe and minicomputers emerged in the 1950s they were bespoke business solutions. Hardware and software were provided as a single unit to be customized by the purchaser as they needed. Of necessity such software was open-source.

Then things changed. Cheap transistor-based processing massively increased the power of computers while reducing their size.

In the 1970s Apple, Commodore, Atari and Tandy fought it out at the desktop level to gather the early adopters. IBM wanted a cheap system to compete and ensure their market dominance in mainframes and minicomputers. They didn’t want to spend too much time or effort on a section of the market they assumed wouldn’t come to much. So, in 1980, they made a critical decision.

They separated software from hardware and published an open set of interoperability standards.

In 1981 Bill Gates and Microsoft answered IBM’s call and changed the world. Their code was released independently, in a compiled format, sold under commercial software licenses, and could run on any IBM compatible computer.

Open-source software remained in universities where future programmers learned the inner-workings of operating systems. The most popular of these systems was Unix.

1990s: Linux and the Internet
Linus Torvalds begins his studies at the University of Helsinki in 1988. He develops a new operating system kernel which he releases in 1991 as Linux. He wants others to enjoy it as well and declares that it will be free to distribute and that the code will remain open to edit. He remains the ultimate authority, though, on what code may officially be incorporated into the Linux kernel.

In 1994 Mosaic Internet Communications (now Netscape) releases their web browser which allows for a visual representation of web-pages. The Internet explodes. Netscape releases their browser free (but not open-source) and expects to sell their web-server software that allows the hosting of websites.

In 1996 Apache is released. It is an open-source, free-use, web-server package that instantly becomes the most popular tool – especially among university network administrators disgruntled with Netscape’s approach. Apache, on Linux-based servers, is the dominant force on the Internet and open-source standards (such as the GNU General Public License) becomes an accepted part of Internet software development.

By 1998 Linux – along with Apache – has gained enough traction that it is being used on company servers. All software running on Linux, in terms of its licensing conditions, also has to be free and open-source. Microsoft is concerned that they will be pushed off the desktop. They mount a credible set of applications and develop the Microsoft web server: Internet Information Services running on Windows NT. First they target Netscape, then Apache.

Microsoft’s dominance of the desktop and browser results in an unusual rebellion. The merging of global youth culture through the Internet results in the pursuit of a common ‘enemy’ they can rebel against. They find one that is literally right in front of them. The company producing the software they use to interface with each other.

“Microsoft is a threat to the world worthy of a James Bond movie. We should take this threat very seriously,” says Professor Lawrence Lessig, creator of Creative Commons. Many teenagers listen and are entranced.

Harking back to the 1960s and the rebellion against globalization and capitalism youth-groups around the world join together. Their leaders are not long-haired liberal arts students, but computer programmers hiding behind keyboards.

Fragmentation is immediate and dramatic. In 2007 there are well over 200 different versions of the basic Linux kernel in general release. The most popular distribution is Red Hat, which produces an enterprise version of Linux, and is the only open-source company making a verifiable profit this way. Their first profit, after a decade of losses, comes in 2005.

Despite this the cry of the open-source movement becomes world-wide.

2007: Testing Copyright Protection
In May 2007 Microsoft announces that open-source software companies, including Linux, are violating 235 of their patents.

A vast number of companies using the software quartet of LAMP (Linux/Apache/MySQL/PHP) are threatened with uncertainty. “Microsoft up to this point has used patents defensively (that is, only if sued themselves) but the gestures that the leadership is sending to the marketplace lately is that they are about to enter into a more offensive phase of using patents,” says Robert Scoble, a former Microsoft employee.

Microsoft relied on trade secrets up till the early 2000s but, under their new general counsel, Brad Smith, they begin aggressively patenting their software source-code. In 2004 they begin discussing licensing this code to their clients.

With the requirements for platform compatibility and software coherence they have little choice. Their code is in the public domain anyway; whether all of it is open-source or not.

Richard Stallman, head of the Free Software Foundation and creator of the GPL, is incensed. GPL version 1.0 which stood for almost 20 years is rapidly updated with new versions in 2006 and 2007. These are all designed to head off any licensing agreements that Microsoft may attempt with other developers and distributors.

The two biggest distributors are Red Hat (with 65% market share) and Novell (26%). In 2006 Microsoft reaches a joint licensing agreement with Novell. In 2007 they turn their sights on Red Hat.

“We’re not interested,” says Matthew Szulik, their CEO. However, by November 2007 Red Hat’s web server market share is dropping below 40% as their customers flee to Microsoft platforms to avoid potential legal liability.

2008: Microsoft Goes Open-Source
In January 2008, after December sales figures for Microsoft reveal that they are almost the dominant player in enterprise server software, Red Hat capitulates.

The cross-licensing deal that Microsoft agreed with Novell becomes the base for the new contract. “We’re happy that this episode is over,” says Szulik.

“Microsoft, in terms of our agreement with Red Hat, will cross-promote Red Hat with our own enterprise bundles,” says Brad Smith.

Red Hat was terrified that their agreement with Microsoft would mark the end of their company. They are surprised. “Our access to Microsoft code has given us the ability to tailor our products. We’ve released a new version of Red Hat called Red Hat Vista which is totally integrated with Microsoft. It’s been well-received by industry,” says a grinning Matthew Szulik. He’s understating the impact. They sell US$ 17 million of support contracts in two weeks, increasing their first-quarter revenue by 25% to US$ 88 million.

The surprise for regulators and executives is that competition is flourishing. “A whole bunch of companies have come in with software ‘bridges’ between various Microsoft utilities and traditional open-source software,” says Richie Martinez, spokesman for US-based Mezzanine Software Solutions. Microsoft’s shares and profits rise even as their market-share declines marginally.

An estimated 17 new software companies emerge in the US alone to meet the demand for software bridges and new applications.

“We thought Microsoft would have us over a barrel,” smiles Alan Mulally, CEO of Ford Motor Company. “Instead our costs have dropped around 10% as those software bridges save us a tremendous amount of trouble with compatibility issues. And that’s just the beginning.”

Steve Ballmer, in an interview with the Wall Street Journal, gives a small indication of Microsoft’s strategy under his leadership. “It amazes me that the open-source and free-software movements always assume that we can’t change our business model if we need to. Microsoft has billions of dollars in cash and can make dramatic changes if necessary. If we can be sure that our licenses are respected then there’s no reason for us not to go open-source. We are open to considering it.”

Secretly, several of Microsoft’s major clients approach Ballmer. Offers are made that Microsoft’s licenses will be respected in exchange for fully opening their code. Google, searching for alternative revenue sources from advertising hosting, is keen to reach an agreement about integrating their services into Microsoft’s platforms to create commercial releases for industry.

Bill Gates, Steve Ballmer and Paul Allen get together over a weekend in May 2008 to discuss the astonishing opportunities that are presenting themselves and produce a dramatic strategic change. Now all they need is the perfect moment at which to announce it to the world.

In June software developers await the Microsoft and News Corp sponsored D7 conference. There are various clefts in the Free and Open-Source Software (FOSS) movement and everyone is suspicious.

Linus Torvalds opens the conference on 17 June with these words: “We have forgotten the critical difference between the words ‘free’ and ‘open-source’. Patents are a protection given developers who allow others to understand how they developed their product so that others may improve on it. That was all I intended when I made Linux open-source. I separately decided to allow it to be free. That was my choice as well. By not allowing software to be open-source and protected we diminish our capacity for innovation. Every other industry works this way. Why shouldn’t software?”

The blogosphere goes wild. What does this mean?

They find out the next night. On 18 June Bill Gates walks on-stage in a hushed auditorium. Some 48 million people are said to be watching via streaming video. “From tonight, at midnight, we are making the Microsoft source-code open and available.” He says no more and leaves the stage. It is impossible to continue. Pandemonium has broken out. Hermann Goethe is asleep at home. A dense network of electrodes is attached to his head and neck. It may look like some bizarre behavioral psychology experiment but Goethe is actually working. “I get paid US$ 20 an hour while I sleep to connect my brain to Facebook’s Headcast,” says a smiling Goethe. “We got...
Read More ...
Menu
Envelope
Linkedin-in
Twitter
Instagram
Youtube
Sign up for Mindbullets