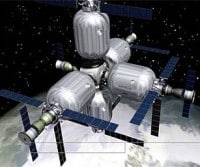 SPACE OUTPOST ALL BLOWN UP

The final module of the Bigelow ‘Last Outpost’ space entertainment center was successfully inflated and attached today. This brings the space station to a stage of completion, and preparations can begin to make it habitable for tourists.

Ten years in the making, this is the first commercial space destination for would-be astronauts. All previous trips to orbit have been to government owned and NASA controlled facilities like the International Space Station.

Now launch companies and ‘spacelines’ such as Virgin Galactic, SpaceX and Blue Horizon are competing for the honor of being the primary carrier to the new Bigelow space center.

Richard Branson has been sending people into space for several years – but only on five minute sub-orbital flips, which, while popular and profitable, are hardly the same as spending a day or two in space, watching the world go round. Virgin will have to raise their game if they want to be the leader in this new space race.

Bigelow’s inflatable station modules were all launched on converted Russian missiles – cost effective but with a limited future and totally unsuitable for human transport. Now that the destination is in place, the challenge for today’s space innovators is to find a way to make trips to the ‘Last Outpost’ affordable and reliable.

Will Jeff Bezos and Elon Musk beat Branson to the finish?

Space Tourism
Space tourism began when multi-millionaires like Dennis Tito and Mark Shuttleworth paid for 4-day trips to the International Space Station aboard Russian rockets. But these were unsustainable ventures with a limited market. When Burt Rutan made the first privately-funded trip into space possible – albeit only for three minutes – the game was on, and Richard Branson was quick to seize the opportunity. His Virgin Galactic enterprise was soon selling tickets for space flips in the future.

2006: Genesis 1 – The first blow-up space ship
An unmanned, inflatable spacecraft launched by a Las Vegas real estate mogul beams back the first images since it slipped into orbit and expanded itself. At first the company declines to publicly release the images, but after a while they are publicized on the internet.

The experimental spacecraft rocketed into space from Russia on a mission to test technology that could be used to build an inflatable commercial space station. Genesis I is healthy with functional onboard computers, solar panels, battery power and pressure systems, says company founder Robert Bigelow.

“All systems are operating,” Bigelow said in a brief statement posted on his website. Bigelow, owner of the Budget Suites of America hotel chain, has lofty dreams of building an inflatable orbital outpost by 2015 to be made up of several Genesis-like modules linked together.

2007: Virgin Galactic gets into space
The prototype spacecraft for Virgin Galactic makes it into space, carrying the logo and livery of the company, but only two test pilots and no passengers. However, the concept has been proven, and ticket sales rise exponentially as people queue up for a once-in-a-lifetime opportunity to escape the atmosphere.

2008: SpaceX gets into orbit
On its third attempt this entrepreneurial rocket company gets it right, successfully launching a satellite into orbit at the lowest payload cost yet.

India’s space program recovers from the disasters of 2006 and becomes a serious competitor to Europe’s Arianespace launch service. China is still shooting for the moon and not competing in the international market. But these are all government programs – the privateers are looking to tourism as a new market.

2010: Bigelow builds the ‘Last Outpost’
Robert Bigelow continues to build his inflatable space station with ‘Nautilus’ modules – bigger and more permanent than Genesis. The robustness of this design scheme is now also accepted.
Virgin Galactic expands their ‘flights of fancy’ into space just beyond the atmosphere into a regular service. ‘Space tourism’ has achieved mass market status.

2014: Upstarts get into the act
With their growing economies, skilled engineers and state support, India and China see the lucrative space tourism market as a new opportunity and start bidding for Bigelow contracts and passenger payloads. The Bigelow space station nears completion.

2016: Racing into space
The race for space tourism is on, with Virgin Galactic, SpaceX, India and China all offering orbital tickets to the bold and wealthy. Russia has discounted their offering, but is no longer attracting customers as their technology is restrictive and not suited to the mass market. As for NASA, they are still on their own mission – to Mars and beyond.

ENGLAND AND WALES KEPT OUT OF EUROPE FOR A SECOND TIME

In a blow for the aspirations of citizens of England and Wales, the island nation’s hopes of joining the EEU (Extended EU) have once again been crushed. “It’s a tragedy. Why can’t the Scottish recognize that we have changed. The old generation that hated membership and never understood its benefits have died out. We’re the...
Read More ...
Menu
Envelope Linkedin-in Twitter Instagram Youtube
Sign up for Mindbullets