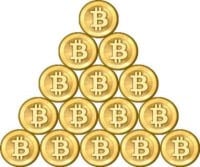 In essence, Bitcoins are digital artifacts created by using computers to solve complex mathematical formulae, essentially cracking a code. The reward one receives is itself an encrypted code, which can be transferred to others, hence the term ‘crypto currency’. Inspired by Bitcoin, Primecoin’s protocol searches for chains of prime numbers.

Digital currencies like Primecoin and Bitcoin have no value other than as a means of exchange for digital products and services, including other digital currencies. However, as real-world merchants began accepting Bitcoin as payment, it took on the role of a virtual currency, like Air Miles, but without central control. Several trading exchanges sprang up, allowing one to buy and sell Bitcoin for real currencies. Speculation was rife, and volatility extreme.

Primecoin may have been established for the sole reason of selling time on idle servers to those who needed serious computing power to ‘mine’ the coins from the cryptic algorithms that defined them. But as any student of Ponzi schemes knows, when a process is established which is entirely self-serving, and relies on continued demand from new entrants into the market to provide returns, it will ultimately collapse.

Some conspiracy theorists have suggested that, far from being a Ponzi scheme, “Bitcoin was the brainchild of a Taiwanese chip making company – to spur demand for their processors.” The idea was quickly copied by designers of alternate crypto currencies, with easier algorithms to mint coins more frequently. Server farms were soon offering pre-configured servers, ready to mine at an hourly or daily rate.

“The great leveller is the cost of electricity,” said one blogger. If the power used to mine a coin costs US$ 130 and they are only trading at US$ 120 then there is no incentive to mine. Speculators who hired virtual servers on the fly, as the difficulty to produce coins ebbed and flowed, were sometimes making money, sometimes losing.

Ultimately the number of eager entrants who wanted to join the scheme dried up, and the whole structure collapsed, but not before several fortunes were made and lost, both in the coins themselves, as well as ‘investment funds’ and related schemes, speculating in the value of Bitcoins. Like any bubble, the roller coaster ride was wild, but unsustainable.

Perhaps the real winners were the tech vendors who risked nothing, but provided all the hardware and facilities to do the number crunching and coin mining!

NO MORE OIL CHANGE – EVER?

Well, ‘never ever again’ may be overstating it just a little, but two nanotech firms are battling it out in the consumer space to see who wins the battle over who can claim the title of “the ultimate lubricant.” Imagine being able to add a small bottle of a high-tech oil additive to your car...
Read More ...
Menu
Envelope
Linkedin-in
Twitter
Instagram
Youtube
Sign up for Mindbullets