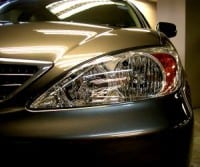 TOYOTA LAUNCHES A CAR FOR THE GREEN CENTURY

Flex-fuel hybrid promises to be the car of the future - today
Dateline: 9 March 2016

At the Beijing motor show, the world’s largest auto event, Toyota today unveiled the ‘car of the eco-age’ – the Lexus Futura. This hybrid-engine flex-fuel compact sedan has sleek and attractive lines, but it is the technology that lies within that has taken the industry by storm.

For the ‘Flexus’ (as it has already been dubbed by insiders) has a revolutionary integrated combustion-electric-fuel-cell engine that can run on anything from biodiesel to kerosene.

It can even run on old-fashioned gasoline in an emergency. But when fueled by S90, the new synthetic diesel-methanol blend developed by Sasol, the Lexus Futura really comes into its own, delivering average consumption of 100km per litre (250 miles per gallon) with minimal pollution.

The car’s 100 volt electric system can power smartphones, laptops and appliances directly, and when parked in the garage will power a small household on a few litres of fuel. At the heart of the Futura’s technology is a powerful computer that uses thousands of nano-scale sensors to automatically detect everything from fuel composition and ambient temperature to current load and gas emissions, and adjust the engine accordingly. It even recycles unused hydrocarbons from the exhaust, and puts the whole system to ‘sleep’ when no power is required.

Every Lexus Futura also comes fitted with a self-peering WiMAX hot-spot, providing broadband connection to smartphones in the car and near the parking lot!

Applying Moore’s Law to cars over the past two decades would have produced a car that could do 200 miles per gallon, cost about US$ 100, and fit in your pocket. But in reality, cars are not the same as iPods or laptop computers, and have physical constraints in terms of size, performance and cost. Modern technology, in particular nanotech and infotech, can make major contributions to overcoming these limitations.

There are two inevitable trends which have created a market for the Lexus Futura. The first is the inexorably rising oil price and the second the need to reduce noxious emissions and its effect on the global environment. In the long run, these factors will force auto manufacturers to adopt new technologies for efficiency and eco-friendliness, as the global population becomes more aware of the issues and votes with their dollars.

It has been established beyond doubt that fuel cells are more efficient than combustion engines from a total energy point of view; from source to energy at the wheels, fuel cells deliver more than 2.5 times the efficiency, and ultimately, the mileage and economy. However, fuel cells are costly to produce, and need critical mass to become mainstream. In addition, when power is needed on demand, to overtake, climb a hill or pull a trailer at high speed, you can’t wait for the fuel cell to power up before stepping on the gas. Which is why hybrid engines make so much sense for versatile automotive applications, combining the best of combustion and electric power trains.

Another factor is Toyota’s success with the Prius – Toyota has led the production-volume hybrid car market for decades. No other auto maker is as well positioned to take the lead in the next generation of hybrids – those that combine fuel cell and flex-fuel technology with hybrid engine economy and versatility. Fuel cells in the past concentrated on hydrogen as the most efficient fuel and were exclusively electric designs – but hybrid cars that use methanol for their fuel cells can also burn methanol in the combustion motor when immediate power is required. A single, convenient liquid fuel for both aspects of the integrated power plant makes the Lexus Futura a hands-down winner at the pump, and on the road.

The need for distributed power on demand extends beyond the automobile. Fuel cells have been an attractive power generation alternative to the national grid for quite some time, both to supplement centralized utilities and to act as backup generators in case of outages. Part of the problem with static fuel cells is that they require regular fuel deliveries, and are not easily transported to where the power is needed. The Lexus Futura solves this problem by being self-propelled – both to the gas station and to the house, cabin or farm where the power is required – a generator with built-in portability at no extra cost. Having a power level compatible with the grid means that multi-car households can even supply excess electricity to the neighbourhood overnight, and earn power credits!

The last piece of the energy puzzle is provided with the latest synthesized fuel blends – maximizing the energy co-efficient derived from natural and manufactured fuels, and delivering the optimum output from both combustion and fuel cell cycles. Sasol has developed S90 flex-fuel, essentially a blend of 90% synthetic diesel made from natural gas and 10% high-octane methanol which optimizes the Futura’s energy per litre. Nanotech sensors and a central computer based on the Sony-IBM ‘Cell’ processor ensure that the maximum use of available energy molecules is achieved under all conditions and with whatever micro-level fuel characteristics exist. Even combustion gasses are monitored and recycled until the final exhaust is virtually harmless to the environment – and all potentially unsafe operating conditions are immediately dealt with and reported to the driver.

With all this power and mobility available in the Lexus Futura, it makes sense to provide a digital communication hub as well. Each Futura has a stubby antenna which connects it via WiMAX to the nearest ‘metronet’ base station – so smartphones and wireless videoPods are all on the ‘net – as long as there is a Futura nearby!

Toyota has also announced that the Lexus Futura will be followed by a minivan and lightweight SUV based on the same platform. All three models will be exclusively manufactured in China, which is now the largest auto manufacturing country and key to Toyota’s affordability strategy. Talk about being upwardly mobile!

After more than 35 years in development, the world’s first commercially available jetpack is now on sale. The sticker price is a mere US$ 150,000. Made from carbon fiber and aluminium, the Martin Jetpack doesn’t have the traditional rockets of science-fiction jetpacks, which are powerful but very difficult to control. Instead it uses rotary thruster...
Read More ...
Menu
Envelope
Linkedin-in
Twitter
Instagram
Youtube
Sign up for Mindbullets